Entry Behaviour;  To say that nobody knew DSM in 2011 would be a slight exaggeration. But as a diversified B2B player with a century of history behind it as the Dutch State Mines, DSM was definitely difficult to understand. Over the last few years DSM had made several developments, such as moving from being a chemicals conglomerate to a company with equally strong competencies in life sciences and materials sciences.

The new corporate brand was launched on 23 February 2011. A new strap-line was chosen: Bright Science. Brighter Living. It’s designed to describe the way DSM uses its unique scientific capabilities in productive partnership with its customers to create brighter lives for people today and generations to come. The company’s new sense of purpose, together with its clear emphasis on the single core value of sustainability, gained internal and external buy-in evident from the get-go.

It was a deliberate choice to rebrand the company in as little time as possible because the CEO did not want the rebranding message to cascade into the company.

To communicate this message internally DSM hired more than 130 commercial cinemas worldwide. And in those cinemas, it ran a film, “Bright Now”. Not a three-minute image movie. Not a half-hour documentary. But a specially commissioned, full-length feature film in which a fictional reporter, Jack Wang from Global Times, has a brief to find out as much as possible about DSM in the space of five days. Every one of the company’s 23,000 employees â€“ distributed across more than 170 sites in almost 50 countries â€“ was invited to a local screening. No fewer than 94 per cent of them watched the film during the first 48 hours of the launch.

DSM’s board of directors led by its CEO, successfully launched the rebranding to over 23,000 employees in 172 locations on six continents within 48 hours.The pride in working for DSM for the staff who participated in the 48 hour Bright Now rebranding event and the CEO was pleased with the success of the brand launch. The film “Bright Now”, in combination with the strategy for launching the new brand internally, was winner of the RISE Award for best corporate event, Cannes European Corporate Media and TV Awards 2011, the European Digital Communications Awards 2011, and the European Transform 2012 Award for Excellence in Brand Transformation, to name but a few accolades. BrandFinance estimated that DSM”s brand increased by 23 per cent from USD 294 million in 2011 to USD 362 million as a result of the rebrand. 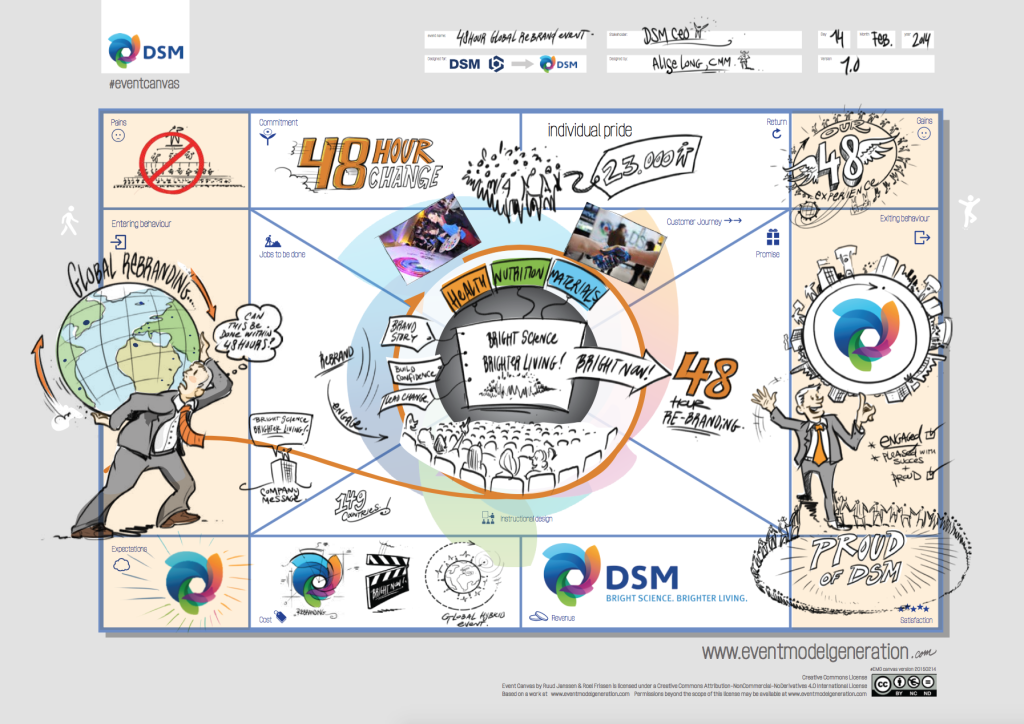